The "Bora Kečić - special transport" doo was founded in 1948. It is located on an area of 60,000 m2 in Zeleznik Belgrade suburb. It has 160 employees, of which 80% of production workers (drivers, truck operators, mechanics, etc.).
"Bora-Kečić special transport" is a company specializing in the transportation of heavy cargo, transshipment cargo truck, and was certified for manual handling of loads up to 1000 t and position them with the help of sophisticated hydraulic equipment. We are also equipped with a conventional trailer truck. We have a customs warehouse size 20,000 m2 under roof.

Our mobile fleet consists of the following vehicles:

In Serbia, we are the exclusive carriers of EPS (Electric Power Serbian) and EMS (Elektromreza Serbia) - for transport of transformers. A few years ago he imported five transformers in China. This equipment has arrived ships in the port of Constanta, transhipped to barges and the river brought to the port of Pancevo. Each transformer has been hard at 240k, while the gross weight of the entire assembly (truck + trailer + load) was 370k. Three transformers in this lot are transported via a metal bridge.

We are the main carriers for the transport of oversized cargo for breweries, sugar factories, EPS, steel US Steel Serbia, shipyards, and all of the companies in the metal industry. The first wind-generator (windmill) installed on Pester was transported and erected by Bore KEČIĆ special handling.

In 2011, we transported a transformer weighing 358t, using a combination of road and rail transport. Auto part (from the substation to the railway line) and a special railway carriage to the final customer, "ABS-Minel Transformers" AD Beograd.
We transported cranes with a range of 34m from the company Cerrato srl for Fiat-Kragujevac and they are assembled using our truck.

For Fiat-Kragujevac have been the main carriers for transport 3 lines of presses. Last year, the project of 200 military transport vehicles (armored units) from Europe to Cambodia. During the project Zezelj bridge in Novi Sad and Bor Kecic-Special transport is the only transporter components from the group Taddei-EDIMA group-Italy.Simultaneously transporting heavy loads for RTB Bor, NIS, etc.. and here we present a smaller portion of our references abroad tj.kompanije who are beneficiaries of our services:

This is a small part of our references (foreign partners): 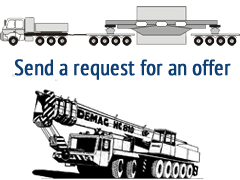